SMA NEWS – CANNES
Ukraine’s President Volodymyr Zelensky made a surprise video address at the opening ceremony of the Cannes Film Festival on Tuesday.
“Hundreds of people are dying every day. They won’t get up again after the clapping at the end,” he told the audience, which had reacted with surprise when the pre-recorded message was introduced.
“Will cinema keep quiet, or will it speak up? If there is a dictator, if there is a war for freedom, once again, everything depends on our unity. Can cinema stay outside of this unity?” Zelensky added.
Zelensky referred to the power of cinema during World War II, including the 1940 Charlie Chaplin film “The Great Dictator” which mocked Nazi leader Adolf Hitler.
“Chaplin’s dictator did not destroy the real dictator, but thanks to cinema, thanks to this film, cinema did not stay quiet,” Zelensky said.
“We need a new Chaplin to prove today that cinema is not mute. Will cinema keep quiet, or will it speak up? Can cinema stay outside of this?”
His speech received a standing ovation from the crowd in the southern French resort town’s Palais des Festivals.
The war is a dominant theme for the 75th edition of the Cannes Film Festival, with a special day dedicated to Ukraine’s filmmakers at the industry marketplace.
“Mariupolis 2,” a documentary about the conflict by Lithuanian director Mantas Kvedaravicius, who was reportedly killed by Russian forces in Ukraine last month, will get a special screening.
Zelensky similarly addressed the Grammy awards ceremony in Las Vegas last month, telling the crowd: “Our musicians wear body armor instead of tuxedos. They sing to the wounded in hospitals.”
The opening ceremony in Cannes had introduced the jury and handed an honorary Palme d’Or to actor and peace activist Forest Whitaker.
“The torments of the world, which is bleeding, suffering, burning… they rack my conscience,” French actor and jury president Vincent Lindon said in his speech. 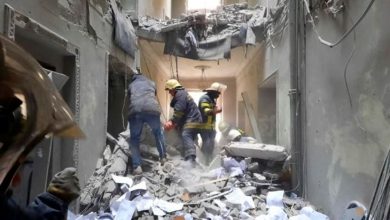 China says US report on nuclear arsenal ‘full of prejudice’