SMA NEWS – BEIRUT
The US mediator handling negotiations over the maritime border between Lebanon and Israel expressed optimism on Friday that the talks, which stopped in April, will resume shortly and said that he was hopeful of reaching an agreement.

Earlier the US mediator crossed the Israeli-Lebanese border by land, entering Lebanon from Naqoura.

Israel and Lebanon are in dispute over about 860 square kilometers of the Mediterranean believed to contain lucrative offshore gas reserves. Both countries have made claims to the area and plan to begin exploration.

Following talks with Aoun, Hochstein said that he was optimistic about reaching an agreement.

BACKGROUND
US mediator Amos Hochstein summarized the meetings by saying he was optimistic about ‘what we have heard and discussed.’

“It was an excellent meeting and I believe that we have made good progress in this field,” he said.

Hochstein added that he was grateful to Aoun for “the discussions that we had during the meeting.”

Aoun’s media office said that Hochstein presented the results of his talks with the Israeli side and made several points concerning the negotiations.

The US negotiator’s visit coincided with an Israeli army announcement that an RTV drone crashed late on Thursday in the sea near the northern maritime border with Lebanon.

Israeli army spokeperson Avichay Adraee said that a technical malfunction caused the crash and the drone was recovered by a maritime force.

The type of drone will be taken out of service until investigations into the incident are completed, the spokeperson said.

Speaking at the airport, Hochstein summarized the meetings by saying he was optimistic about “what we have heard and discussed.”

He said there had been progress in the negotiations to reach a settlement that benefited the Lebanese economy, and added: “We will do our best to reach an agreement that satisfies everyone.” 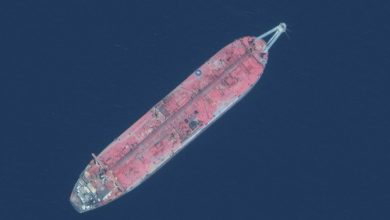