SMA NEWS – TEHRAN
Iran released a prominent actress from an Oscar-winning film on Wednesday, nearly three weeks after she was jailed for criticizing a crackdown on anti-government protests, local reports said.
Iran’s semi-official ISNA news agency said Taraneh Alidoosti, the 38-year-old star of Asghar Farhadi’s Oscar-winning 2016 film, “The Salesman,” was released on bail. Her mother, Nadere Hakimelahi, had earlier said she would be released in a post on Instagram.
After her release from the notorious Evin Prison in Tehran on Wednesday, Alidoosti posed with bunches of flowers, surrounded by friends. No further details have been released about her case.
Alidoosti was among several Iranian celebrities to express support for the nationwide protests and criticize the authorities’ violent clampdown on dissent. She had posted at least three messages in support of the protests on Instagram before her account was disabled.
One message had expressed solidarity with the first man to be executed on charges linked to the protests, which were triggered by the death of a woman in police custody and have escalated into widespread calls for the overthrow of Iran’s ruling clerics.
The protests mark one of the biggest challenges to the Islamic Republic since it was established after the 1979 Islamic Revolution. Security forces have used live ammunition, bird shot, tear gas and batons to disperse protesters, according to rights groups. 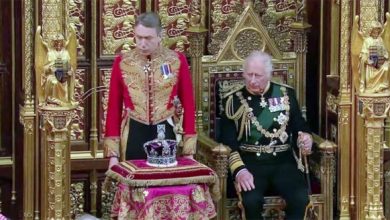