SMA NEWS – STUNG TRENG
Four-metre giant stingray tagged and released by scientists from Cambodia and the US
An almost four-metre-long giant stingray snared in the Mekong River in Cambodia is thought to be the world’s largest recorded freshwater fish.
The stingray weighed slightly under 300 kilograms, scientists from the South-East Asian nation and the US said on Monday.
The fish was caught on June 13 by a local fisherman south of Stung Treng in north-eastern Cambodia.
The fisherman alerted a nearby team of scientists from the Wonders of the Mekong, a joint Cambodian-US research project, which has publicised its conservation work in communities along the river.
The previous record for a freshwater fish was a 293-kilogram Mekong giant catfish, discovered in Thailand in 2005, the group said. 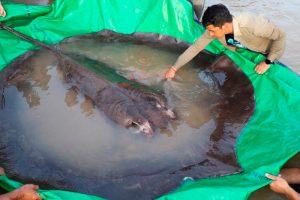 Caffeine be dangerous for pregnant women