The United Nations Security Council extended Thursday the mandate of the UN Mission to Support the Hudaydah Agreement (UNMHA) for 12 months until July 15, 2022. The move came in parallel with the naming of Swedish diplomat Hans Grundberg as new special envoy to Yemen by UN Secretary-General Antonio Guterres.

Grundberg, a Middle East specialist who has served as the European Union’s ambassador to Yemen since 2019, would replace Britain’s Martin Griffiths, who was named in May to be the world body’s under-secretary-general for humanitarian affairs.

In June, Griffiths told the Security Council his efforts to end years of war in Yemen had failed, expressing his “deep regret” not to have made more progress during his three years in the post.

Conflict flared in Yemen in 2014 when the Iran-aligned Houthi militias seized the capital Sana’a, prompting a Saudi-led military intervention to prop up the government the following year.

The UN moves on Thursday came as the situation in Yemen was deteriorating, with military escalation in Marib and the near-collapse of the Riyadh Agreement between the Yemini government and the Southern Transitional Council (STC).

Local sources in Marib confirmed to The Arab Weekly on Friday renewed confrontations on a number of strategic fronts in the governorate, where the Houthis have been seeking to achieve a military victory to strengthen their bargaining position in peace talks.

“Fierce battles are raging on the Jabal Murad fronts, south of Marib. The National Army and the Resistance forces, with air support from the Arab coalition, launched a large-scale attack on the Rahba and Elfah fronts. The National Army recaptured Rahba and took control of the city’s centre after fierce battles,” Yemeni journalist Abdul-Wahhab Baheibah told The Arab Weekly.

Buhaibah added the Houthi militias suffered heavy losses during the confrontations and resorted to carrying out suicide attacks in an attempt to regain lost territory.

The military escalation in Marib and the political tensions within the anti-Houthi camp have exacerbated Yemen’s economic crisis, which caused the collapse of the value of the Yemeni currency (the riyal) in government-controlled governorates and accelerated the deterioration of living conditions and the collapse of services.

The quick developments in Yemen are accompanied by shifting regional and international dynamics that could affect the UN’s approach to Yemen’s crisis in the near future.

Recent US and European statements about a stalemate in Yemen showed the international community has failed to pressure the Houthis into accepting a ceasefire plan and resuming peace talks.

Experts believe the coming period will be marked by a decline in the American and British role, in favour of a new Western approach based on the European Union’s vision of the Yemeni crisis.

The EU, experts say, believes the Yemeni crisis can be resolved through negotiations with the Iranian regime, as part of the ongoing talks in Vienna, aimed at resuming the nuclear agreement with Tehran.

The Houthis’ rejection of a peace ceasefire is not the only challenge ahead. A dispute between the government of President Abd Rabbuh Mansour Hadi and the Southern Transitional Council could turn into an internationalised crisis in the absence of precise mechanisms that would compel the two sides to implement the Riyadh Agreement’s provisions.

Political sources describe the growing international interest in the Agreement as an attempt to compensate for the failure to advance the peace process between the Yemeni government and the Houthi militias over the past years.

Yemeni political researcher Saeed Bakran told The Arab Weekly that the key challenge that the new UN envoy will face is scepticism about the effectiveness of UN efforts.

“The parties to the conflict do not expect the new envoy to make any breakthrough. This is the real challenge given the faults of the mechanism adopted by the UN to define the conflict and identify its parties,” Bakran explained.

On the Riyadh Agreement and the possibility of achieving progress after the appointment of the new envoy, Bakran added, “It seems clear that we are heading towards internationalisation in view of differences between government and the STC and the increase of mistrust between the two sides.”

Ezzat Mustafa, head of the Fanar Centre for Policy Research, believes that the new UN envoy to Yemen needs regional and international support to overcome the challenge of uniting ranks of the anti-Houthi players, including the government and the STC. This task, Mustafa says, requires the full implementation of the Riyadh Agreement’s provisions.

“The implementation of the Riyadh Agreement will be a priority for Grundberg if he wants to make progress in his mission,” Mustafa said. 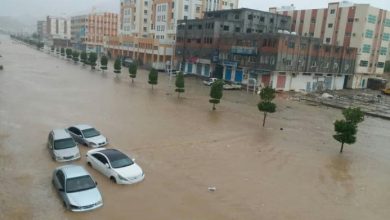 Natural Disasters in Hadramout: Renewed Suffering Amid Absence of State