SMA NEWS – ADEN THE CAPITAL
Eight days left before the end of the humanitarian truce in Yemen after it was extended for two additional months till October 2nd. However, this truce, which has been the biggest breakthrough in the wall of the 8-year raging war, faces the prospects of failure to renew it again or to build upon it.

Meanwhile, and in a race against time, UN Envoy to Yemen Hans Grundberg seeks to reach an expanded truce agreement with new and additional terms based on the ruins of the current truce. Over the previous period, these endeavors stumbled. The last days of the truce are apparently the last chance to achieve this aim.

Two days ago, Grundberg told the Qatar-owned Al-Jazeera [1] that he “delivered all parties a proposal to renew the truce as long as possible”. He added: “We await their response. It is necessary to reach a productive approach among all parties”.

Practically, it seems that the global circumstances and changes helped to enhance the international desire to stop the war in Yemen, even temporarily. This has been actually carried out for about 6 months. Although the cannons of war have not been completely silenced, the breaking-bones battle between the internationally-recognized government and the Houthis has actually stopped during the past period in an unprecedented way since 2015.

The Houthi demands and terms have been the biggest obstacles to reach an expanded truce. The Iran-backed group sticks to terms seen by the other party (PLC) as unacceptable. This includes the complete opening the Port of Hodeidah and the Sanaa International Airport for the commercial movement. The Houthis have not fulfilled their obligations such as opening the roads.

The truce contains a number of articles and conditions which have not been practically implemented. Except for the partial opening the Port of Hodeidah and the Sanaa International Airport in favor of the Houthis, the truce apparently has not exceeded the cease-fire level despite its relatively long age. Even the cease-fire has been marred by violations, some of which threatened its continuity.

During a meeting with the French ambassador to Yemen on September 13th, The new Yemeni Minister of Defense, Lieutenant-General Mohsen Al-Daeri said that “the Houthis committed more than 8000 military violations of the truce since its very beginning. On the other hand, the Houthis said on September 18th that their rivals made 220 violations of the truce in just 24 hours.

In a symposium with the former US ambassador to Yemen, PLC Chairman Rashad Al-Alimi said that “the Houthis presented new demands to prolong the truce while they have not abided by the old terms”.

This came one day after Al-Alimi’s speech in the The UN General Assembly session on Thursday in which he lambasted the Houthis by saying that “they are the ones who created the crisis in Yemen through an Iranian support”. He renewed “PLC’s stance which backs prolonging the humanitarian truce in Yemen”. According to the Saba News Agency, Al-Alimi and his accompanying delegation boycotted the speech delivered by Iranian President during the session.

In statements, published by France Press on Friday, Saudi Foreign Minister Faisal bin Farhan blamed the Houthis as being responsible for “the possible return of the war”. The agency quoted the prince as saying “The truce in Yemen is unlikely to be renewed again”.

“South24” learned from governmental sources that “PLC Chairman agreed on a request to extend the truce but PLC as a whole has not so far determined its stance towards this”.

Moreover, the STC Presidency stressed during its Saturday meeting on the need for their participation in the truce renewal negotiations. The statement said: “The renewal of the truce is basically related to what extent the elements of peace are provided in South.” [8] On the other hand, the Houthis adopted a stricter stance towards the truce which does not provide more gains to the group.

In statements broadcast on “Al-Masira”, Yemeni Deputy Prime Minister for Defense and Security Affairs Jalal Al-Ruwaishan said: “We don’t bet on the truce to achieve the strategic goals of the Yemeni people”. He added: “it is not possible to accept the state of no war and no peace pushed by the hostile alliance”.

During his meeting with Chief Assistant to the Iranian Foreign Ministry Ali Asghar Khaji on September 10th, the Head of the Houthi negotiation delegation, Mohammed Abdulsalam confirmed the Houthi terms for any renewal of the reduce, foremost of which are “lifting the siege, ending confrontations and paying the employees’ salaries”.

After his meeting with the UN Envoy to Yemen in Tehran on September 4th, Iranian Foreign Minister Hossein Abdollahian, said that: “The continuation of the existing situation and the achievement of a permanent ceasefire depends on the complete abolition of the humanitarian siege imposed on Yemen”.

On August 2nd, Grundberg revealed the features and the terms of the expanded truce he seeks to achieve during incoming weeks.

He said that the proposal includes “an agreement on a transparent and effective disbursement mechanism for the regular payment of civil servant salaries and civilian pensions, the opening of roads in Taiz and other governorates, opening additional destinations to and from Sana’a International Airport, and providing fuel and its regular flow of fuel to the ports of Hodeida”.

On September 8th, the Swedish diplomat met with Rashad Al-Alimi in Riyadh to discuss the path of the truce and the endeavors to renew it on the eve of a closed session of the UN Security Council. 4 days earlier, Grundberg visited Iran where he discussed with the Foreign Minister and other Iranian officials the expansion of the truce.

Grundberg’s moves towards an expanded truce agreement were not the only efforts. On August 17th, the US Department of State announced the return of the US Envoy to Yemen Tim Lenderking to Washington after visiting UAE, Oman and KSA.

The US Department of State said that “ During his trip, Special Envoy Lenderking engaged with senior officials from the Republic of Yemen Government, the United Nations, and regional and international partner countries as well as the Yemeni people to secure an expanded UN-mediated truce in Yemen to take effect October 2nd”.

In a statement, Friday, the permanent five members of the United Nations Security Council and the European Union, Germany, Kuwait and Sweden said: “an expanded truce agreement will provide an opportunity to reach an inclusive, comprehensive negotiated political settlement”.

Additionally, the international statement condemned the recent Houthi military parades in Sanaa and Hodeida and the recent Houthi attacks against forces affiliated with the Yemeni government in Al-Dabab, west of Taiz in late August which killed and injured dozens of soldiers. The statement stressed that there is no military solution for the Yemeni conflict.

Regarding the international stances towards the truce in Yemen, Saudi political and military expert Brigadier General Hassan Al-Shahri told “South24” that “the international positions are fluctuating according to the interests of major states amid crises and the current accelerated regional and international transformations”.

He added: “I think that the Yemeni government and the Houthis will be convinced to renew the truce again, or may reach an expanded truce agreement in order to search for viable outcomes that meet the minimum demands of the Yemeni legitimate government as well as maintaining the minimum Houthi gains”.

Yemeni politician and academic Mohammed Jumaih believes that “renewing the truce is the only available option in the current circumstances”.

He told “South24”: “I think that local, regional and international parties have no choice but to prolong this truce due to the global needs, the international changes and the major countries’ keenness to secure the Red Sea and the Arabian Sea navigation lanes as well as the need for pacification amid conflicts that erupted in other areas”.

He told “South24” that: “the truce will continue but several thorny issues such as opening the roads and exchanging of prisoners will be stuck. These files are negotiation cards in the Houthi hands by which the Houthis seek to gain a share of oil and gas sales revenues more than being a humanitarian issue”

He added: “Most of the international community looks at the Yemeni war file since 2018 as a humanitarian case which needs aid rather than as a political conflict that requires taking a clear stance from all parties and making the right decisions. Since then, all the UN Security Council sessions have been more interested in the humanitarian aspect than the political one”.

Jumaih excludes the failure of the attempts to renew the truce or reach an expanded one.

He added: “The UN Envoy and the UN aim to expand the truce for additional 6 months. The UN Envoy visited Iran and met with Iranian officials. It is a clear indication that this file is tied to the Iranian file. Following this visit, Tehran summoned Mohammed Abdulsalam who made very statements dictated by Iran”.

He added: “Iranians sent a clear message that they link between the situation in Yemen and the Yemeni file negotiations. Unfortunately, it seems that the Western -Iranian negotiations probably reached a deadlock in Vienna. Therefore Tehran seeks to use the Yemeni file as a pressure card”.

He continued: “At the end of the day, the truce’s expansion relies upon the international community’s ability to pressure for that. I don’t think that there will be a strong objection towards this expansion from the government and the Coalition. The complexity in my opinion lies in the Houthis and Iran”.

Hassan Al-Shahri agreed with Jumaih that the failure of the renewal of the truce or reaching an agreement to expand it, are unlikely. He added: “At this point, every party seeks to enhance its political and military gains whether the legitimated Yemeni state or the Houthis”.

In this regard, Masoud Zain believes that “the failure of the truce is not on the table of the political conflict parties in Yemen, at least currently”.

He added: “The Houthis want to achieve gains beyond the truce and to normalize and legitimize their authority in most of the Northern areas controlled by them”.

He added: “Moreover, the international community currently believes that the success of the truce is the best transitional option. Additionally, the agenda of the international relations priorities this year shifted from our region to new areas such as Ukraine and may be to Central and Southeast Asia later”.

Zain said that the current truce “is within the limits acceptable to both parties, despite the small gains of each party “.

He added that “The necessary limit of the gains was achieved as the truce was a true outlet to the internationally-recognized government’s presence in the remaining areas in Marib. On the other hand, the Houthis made gains by restoring the commercial air flights from and to the Sanaa Airport and to allow oil products to access to their areas via the Port of Hodeidah”.

He noted that this assessment “applies to the regional and international parties as an accepted situation to give an opportunity to any diplomatic efforts between Iran and KSA and between Iran and the US”.

Al-Shahri called on PLC to “deal with the current truce in a way that serves its interests”. He added: “the decision makers in the PLC have to understand the international game in Yemen. It is not a secret that the current envoy is the architect of the Stockholm Agreement that provided the kiss of life to the Houthis in Hodeida”.

Jumaih draws links between prolonging the truce in Yemen and a number of international files such as the Ukrainian crisis and global energy.

He added: “Everything makes the continuation of the current pacification a must to provide the space for the international forces to deal with the Ukrainian file and to facilitate transporting gas from its various sources around the world to its consumers in Europe and the US”.

He concluded: “The current US administration seeks to make a progress in the Yemeni arena to gain more popularity in the upcoming elections”. – by south24 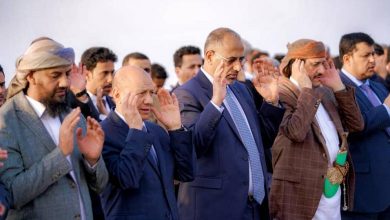