SMA NEWS – ADEN THE CAPITAL
Mr. Fadl Mohamed Al -Jaadi, the Deputy Secretary -General of the General Secretariat of the Presidency of the Southern Transitional Council (STC), member of the Presidency of STC, met on Thursday, in the capital, Aden, the delegation of Arab journalists and media workers participating in the Southern Journalists and Media Members Conference held in the capital, Aden, in the presence of a large participation of various media cadres from the governorates of the South.
At the beginning of the meeting, Al-Jaadi welcomed the participating delegation in the conference, and their visit to the capital, Aden, presenting a brief explanation about the issue of the people of the south and the advantages and status of the southern state whose people made concessions for unity in 1994, and its results were the deprivation and caused destruction of private and public property.
Al-Jaadi stressed the determination of the people of the south to restore their state and all its legitimate rights and build the southern state that will be with all and for all its sons, and work with the brothers in the coalition countries to support the Arab project, combat terrorism and confront all internal and external projects that are against it.
The meeting discussed the most prominent developments on the southern scene at various political, economic and service levels, referring to the southern general situation in various aspects, and reviewing a number of topics in this context. 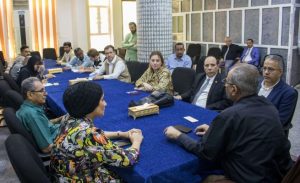 The Administrative Body of the National Assembly continues its periodic meeting headed by Dr. Anis Luqman

Breaking News: Hadhramaut Valley Records Massive Numbers of Citizens Inlested in the Mobilization Records to March to Aden to Participate in #The_Million_March_of_Empowerment_and_Persistnce in Aden in Support of the Measures Taken by The Southern Transitional Council and the Southern Armed Forces