[su_label type=”info”]SMA News – Aden – Exclusive[/su_label][su_spacer size=”10″][su_dropcap]P[/su_dropcap]resident Aidarous Kassem Al-Zubaidi, president of the southern transitional council, asserted the importance of positive and purposeful southern media that supports the culture of belonging to the south as a homeland and identity in addition to motivating the society to work for reconstructing the future of the upcoming state. he also demanded southern media men to adopt a discourse that supports southern unity and strengthens social texture in addition to uncovering vicious ideas seeking to dismantle and frustrate the society.
During his meeting with southern journalists and media men on Sunday June 2nd, 2019, Al-Zubaidi indicated that the council with support all media activities that serve this career and restore the glory and uniqueness of Aden in that field. He also appreciated the efforts of southern media activists during the past years that made the southern cause well-known inside and outside the country.
Al-Zubaidi said: “In spite of what we achieved of success; we are still in need for more efforts. We are undergoing a stage of reconstructing the systems of the southern state that will be restored so soon as we can see it approaching. We need organizational work that puts a framework for all efforts serving our cause, away of any differences. We all believe in the general objective. That is what really matters. The council is in the front line and it is our duty to support all efforts that reconstruct the systems of the southern state according to modern perspective without imposing ant specific attitudes”.
Al-Zubaidi indicated that the southern cause is steadily on its path, politically and on the ground, indicating that our southern troops are achieving major victories over the collapsing enemy. He also asserted that the future is for the Arab project that we are part of while the Iranian project is now dyeing in front of the determined attitudes of the Arab Coalition packed by Saudi Arabia and UAE.
A number of media men and journalists expressed their appreciation of the president’s invitation asserting that he is kin on meeting all sectors of southern society. They discussed several issues of concern in the media sector. They also provided several ideas and suggestions for improving southern media work to reach for local Arab and international audiences. They asked the council to support a unified southern media project that improves the vision of media agencies and avoids the lack of a general vision as this is a challenge facing their career.
Dr. Nasser Al-Khabji and Eng. Adnan Al-Kaf, members of the council’s presidency, Dr. Abd Al-Nasser Al-Wali, chairman of Aden local leadership and Eng. Nizar Nasser, official spokesman of the council, attended the meeting.
June 5, 2019Last Updated: June 5, 2019
0 0 2 minutes read
Facebook Twitter LinkedIn WhatsApp Telegram Viber Line Share via Email Print

Al-Khobaji: The attention to the families of martyrs and wounded is top of priorities for Transitional Council 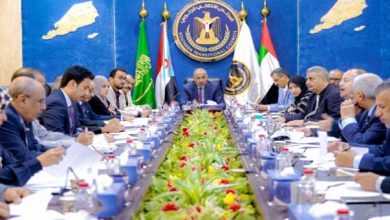