The meeting also discussed the efforts of the southern transitional council to normalize life in Aden and to support work of security, military, service, public facilities and UN organizations in Aden.

Ben Brik explained in details the events of Aden, its causes, measures taken by the council to normalize life in Aden and obstacles imposed by the legitimacy to hinder all that. He also asserted that normal life was fully restored to Aden.

In turn, Khouri asserted full support of UN to all efforts that help continuation of UN and other international organizations work. He also asserted the importance of normalizing citizens’ life without any adverse effects on it according to international laws and conventions. He thanked the efforts of the council in this respect.

Expressed the willingness of the council to facilitate work of UN and all other international organizations in favor of citizens’ life and security of Aden. 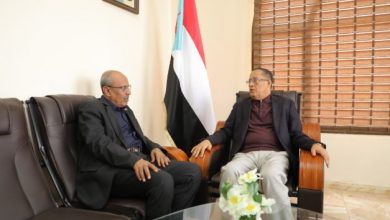