SMA NEWS – ADEN THE CAPITAL
The head of the Consultation and Reconciliation Commission, Mr. Mohammed al-Ghaithi, said that the commission undertakes the task of bringing the forces, political parties, and national components closer together and uniting their ranks under the umbrella of legitimacy, leading to peace.
He pointed out, in a statement on Wednesday, that the commission made great efforts in this regard through its specialized committees, and that our lively political forces have no choice but to succeed, adding that: “We have found everyone really cooperative.”
al-Ghaithi added: “As a matter of my responsibility, I call on the brothers in the coalition countries to review and control the media and political discourse of some media outlets, and some of their prominent activists and writers, stressing that the continuation of this media confusion without precise directions contributes to the failure of our efforts of cohesion and unity to confront the Houthi militia.” “.
He believed that – without a doubt – the concern of our brothers for the future and safety of our people does not accept the continuation of such absurdity, indicating that we are making efforts to control the rhetoric of political forces at home, and this is a very difficult task, which should not be marred by inaccurate media rhetoric from abroad, as some believed this represents the direction of our brothers’ institutions, and this is undoubtedly incorrect.”

President Aidaroos Al-Zubaidi receives the Ambassador of the United Kingdom 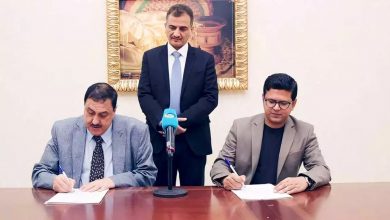 With Emirati support, Lamlas and Al-Shuaibi sign agreement to strengthen security system in Aden the capital