The Deputy Secretary-General of the Presidency of the Southern Transitional Council, Mr. Fadl Mohammad Al-Jaadi, met today, Monday, at the headquarters of the General Secretariat in the capital, Aden, the head of the Consumer Cooperatives Federation, Hussein Abdul Rahman Fadaq.

In the meeting, Al-Jaadi listened from the Head of the Consumer Cooperative Federation, to an explanation of the Federation’s program and aspirations, and the plans that are being prepared in this regard.

The meeting was attended by Ahmed Salem, Vice-Head of the Federation, Abdul Fattah Al-Shaeri, Director of the Economic Department, and Saleh Al-Radu’, the organizational official, in which Al-Jaadi urged the need to provide tangible work in society by activating the Federation’s activity, expanding it and highlighting it in the appropriate ways to present the work.

#Al-Wali chairs emergency meeting with directors of all districts and offices of health, public works, cleaning and water and Transitional Council’s Relief Committee in the capital #Aden 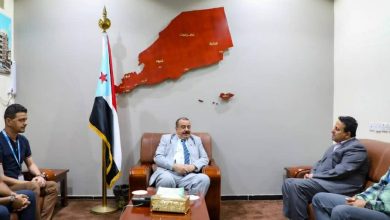