The leadership of the Fourth Brigade Resistance sent on Thursday, a military battalion, with its equipment to reinforce the positions of the Southern Armed Forces stationed in Al-Fakher Front, north of Al-Dhalea.

In a statement to the Staff of the Fourth Brigade, Captain / Barakat Al-Jabali, he stressed that these reinforcements, which were sent by the Fourth Brigade Resistance led by Colonel Ossan Al-Shaari, is within the framework of the national and combat missions assigned to support and strengthen the southern forces stationed on Al-Dhalea fronts and to meet the necessary military requirements for the combat missions in the face of the Houthi militias on Al-Dhalea border, and to stop the attacks on citizens and the bombing against populated villages, in an attempt to return to Al-Dhalea.

Captain Barakat Al-Jabali said that the sent reinforcements are according to the directives of the Commander in Chief of the Southern Resistance Brigades, Major General Shallal Ali Shaya, to confront the remnants of the Houthi militias, to fight the battle of heroism and honor, and to supply this front and fortify it according to a deliberate and organized military strategy.

Staff of the Fourth Brigade concluded his speech by saying that the brigade leadership will exert all efforts to reinforce and provide this front and other fronts with the fighters, praising the steadfastness, and daring of the heroes of the southern armed forces, who achieved great victories and cost the militias heavy losses in lives and equipment during all its attempts of infiltrations.

For his part, Commander of the Third Battalion, Commander Shafiq Al-Dahmi, paid tribute to the sacrifices, steadfastness and bravery of the Fourth Brigade Resistance and all the heroes of the joint southern forces, with all their different formations, who were attached to all the fronts and all the southern fronts to defend the homeland.

After Controlling the Situation, the Southern Resistance Troops Deploy in Adan and Block Some Roads 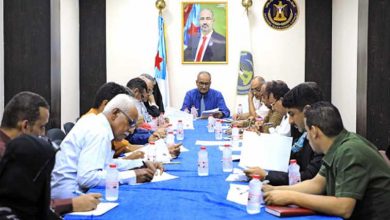