SMA NEWWS – AL-QATTAN
A mass demonstration was launched in Al-Akkad area of Al-Qattan District of Wadi Hadramout, on Monday, to demand the departure of members of the First Military Region from the valley of Hadramout, and to confront lawlessness and extremism.
The demonstration came in response to the call of the youth of anger in Hadramout valley within the popular escalation program of rejecting the presence of the terrorist Brotherhood and its tools.
The participants denounced the escalation of murders, the spread of drugs and crime in the valley and desert of Hadramout, and blamed the forces of the First Military Region of the Brotherhood terrorist militia for causing instability.
The demonstrators raised the flags of the state of the South and pictures of the leaders of the south, calling for the implementation of the military part of the Riyadh Agreement, and the recruitment of the people of Hadramout valley to be deployed in the valley in order to impose security. 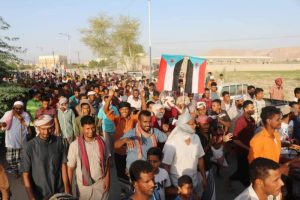 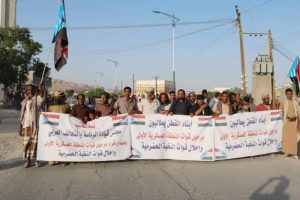