SMA NEWS – ADEN THE CAPITAL
President Aidarous Qassem Al-Zubaidi, the president of the Southern Transitional Council (STC), and Deputy Head of the Presidential Leadership Council (PLC) in his office in the capital, Aden, on Thursday, met with Eng. Muein Al-Mas, Chairman of the Board of Directors of the Roads and Bridges Maintenance Fund (RBMF) in Aden-Headquarters.

President Al-Zubaidi was briefed by Eng. Al-Mas on workflow of the RBMF, and its efforts to rehabilitate and maintain public roads and roadways in the capital, Aden, and other governorates.

The meeting, too, reviewed the total number of projects implemented by the RBMF in all governorates of the South, and the difficulties encountering the directorate of the RBMF, and ways that can contribute to solving such challenges.

The president urged the chairman of the Board of Directors to make more efforts to rehabilitate and maintain the public roadworks and perfectly launch completing the ceased projects in the governorates, stressing the importance of developing the roadways as a lifeline and one of the most important pillars of development.

In turn, Eng. Al-Mas expressed his thanks and appreciation to President Al-Zubaidi for his constant keenness to follow up on service institutions and the efforts he has been making in overcoming the difficulties that hinder their work.

The meeting was attended by Eng. Ali Ahmed Hasan, Undersecretary of the Ministry of Public Works for the Roads Sector. 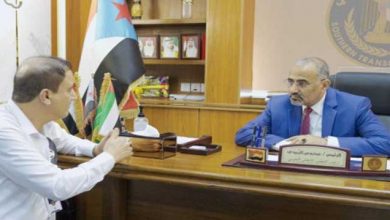 President Al-Zubaidi gets briefed on situation of 39th Armored Brigade