The Southern Transitional Council, issuedو on Monday, a press statement regarding the attack of the terrorist Houthi militia that targeted civilian sites at Abu Dhabi International Airport and Al-Mussafah, hereunder it is:

We condemn in the strongest terms the treacherous terrorist attack carried out by the terrorist Houthi militia, targeting civilian objects at Abu Dhabi International Airport and Al-Mussafah.

This terrorist attack with drones and missiles confirms once again that this Iranian-backed terrorist group has become a source of threat to the region in general, which calls for redoubling and mobilizing efforts to restraint this terrorist obsession, especially since this threat comes after the terrorist piracy operation carried out by the militias in the Red Sea, during which the UAE ship ” Rawabi” was hijacked, and the repeated targeting of civilian objects in the Kingdom of Saudi Arabia and the capital, Aden, which resulted in hundreds of civilian casualties.

We affirm our support and solidarity with our brothers in the United Arab Emirates and our standing with them in all what they take towards the requirements of responding to this cowardly terrorist aggression.

Member of the Council Presidency 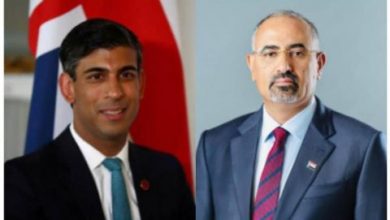 Message from European Institute of Peace to President Al-Zubaidi