In a press release issued by Fadl Al-Gaadi, acting secretary general and member of the presidency, the southern transitional council denounced and resented assaults, violations and provocative acts of armed powers and groups related to Muslim Brotherhood of the legitimacy against citizens of Bihan – Shabwa and directorates of Hadhramaut valley. The council warned these powers and who support them from the consequences of their hostile and provocative acts indicating that the council will retaliate firmly and heavily to save the dignity of southern citizens everywhere.
Al-Gaadi indicated that the council is observing with major concern these repeated assaults and provocations of Muslim Brotherhood powers inside the legitimacy against citizens of Bihan, Aden and directorates of Hadhramaut valley, expressing his denouncement and refusal to such hostile acts.
Al-Gaadi also indicated the siege of Moukes village and Bihan by troops of the 26th Mech Brigade and threatening citizens of blasting their houses in case they refuse to bring down the southern flags in addition to assaults of last Tuesday may push the directorate into chaos. He asserted that these acts are denounced and those who committed it will be punished.
Al-Gaddi also said that the council will never deal loosely with any assaults towards southern citizens anywhere calling the legitimacy to control its tools and elements who try to push the country, especially southern territories into chaos with such provocative acts as it was the case in Bihan – Shabwa and directorates of Hadhramaut valley in addition to the incident of Military Academy in Salah El-Din.

#Al-Wali chairs emergency meeting with directors of all districts and offices of health, public works, cleaning and water and Transitional Council’s Relief Committee in the capital #Aden

Bin Farid: #South Arabia will only accept its independent state no matter how many enemies congregated 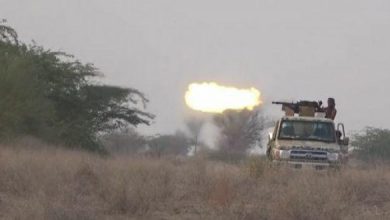 Clashes erupt on the frontlines of Tur Al-Baha