SMA NEWS – ADEN THE CAPITAL
The Southern Transitional Council (STC), today, on Thursday, organized a speech and artistic celebration on the occasion of the 5th anniversary of Aden Historic Declaration, which coincides with the anniversary of establishing the STC.

In the celebration, which began with reciting verses from the Holy Quran, the Southern National Anthem, and standing for a tributing minute to read Al-Fatiha for the souls of the loyal martyrs of the South, Major General Ahmed Saeed bin Brik, Chairman of the National Assembly of the STC, delivered a speech in which he conveyed to the attendees the greetings of the president Aidarous Qassem Al-Zubaidi, President of the STC, wishing, on this precious occasion, success and achieving the aspirations.

Major General Bin Brik added, during the celebration, which was attended by Mr. Fadl Al-Jaadi, Deputy Secretary-General of the General Secretariat of the STC, a number of members of the Presidency of the STC, and the STC’s ministers in the power-sharing government, “This heyday of celebrating the 5th anniversary of Aden Historic Declaration, which coincides with the anniversary of establishing the STC has included many turning points that were eventful with firm positions during which the southerners sacrificed trains of martyrs from Mayon Island to Al-Mahra and Socotra.” Praying to Allah the Almighty to bestow His vast mercy on the martyrs who have been falling before and after this momentous event, assuring their sacrifices will be the ignitive light to achieve the supreme goal of people of the South.

Bin Brik pointed out that “there are many achievements that have been fulfilled before and during the days and stages of Aden Historic Declaration, and it is going to be reaped due to steadfastness of the STC, courage and valiancy of the Elite Forces, Backing and Supporting Forces, Security Belts and Southern Resistance,” noting that the South has excessively been suffering from wars, collective punishment, and feud to the STC, either directly or indirectly, as well as there are voices, which were and are still spreading poisoned words against the national positions of the STC which represent a great and sincere mission led by the determined leader, Aidarous Al-Zubaidi, to steer ship of the South to the safe harbour.

During the celebration, Bin Brik expressed gratitude to leadership of the Arab coalition countries led by the Kingdom of Saudi Arabia, the United Arab Emirates, and the Cooperation Council for the States of the Arab Gulf (GCC), for all their exerted efforts to accomplish Riyadh consultations.

Bin Brik stressed that Riyadh consultations has come to achieve the same goals of implementing Riyadh Agreement, emphasized the need to implement all the provisions of Riyadh Agreement, including directing the forces in Hadhramaut and Al-Mahra to the frontlines to liberate their areas in the North Yemen, reiterating readiness of the southern forces to stand with them in this regard.

In his speech, Bin Brik underpinned the formation of the Presidential Leadership Council, noting that it has a great responsibility to alleviate and lift distress of our people on the service sectors, calling for rebuilding State institutions, especially the military and security ones, to perform their tasks, particularly in fighting against terrorism, in the same context, calling for confronting negative and alien phenomena in the southern society.

Bin Brik concluded his speech by emphasizing confidence in the leadership of the STC headed by President Aidarous Al-Zubaidi, and importance of the southern forces to keep vigilance to confront terrorism and anti-South forces that seek to destabilize its security and stability.

The celebration, which was also attended by a number of security and military officers, executive bodies of the STC in the governorates, Supreme committees, government officials, national and community figures, included several artistic and cultural paragraphs, and a documentary film was displayed, which reviewed the ongoing course of progress of the STC since its establishment, produced by Media Department in the general secretariat and Aden Independent Channel; the film has acquired the approbation of all. 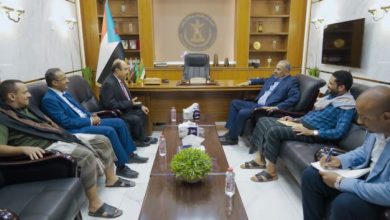