Despite the drama of spot kicks, after 90 minutes of action at Lusail Stadium ended in a 1-1 draw, it was a more-than deserved victory for the Riyadh side, who had dominated for much of the game.

Reigning Saudi Professional League champions Al-Hilal, who have won their first three games of the new season, were on top from from kick-off and took a deserved lead after 18 minutes with an opening goal that would be worthy of the World Cup final that will take place in the same stadium in December.

A lofted pass from the half-way line by impressive Colombian midfielder Gustavo Cueller found Ighalo just outside the area. The Nigerian striker beat the offside trap, controlled the ball with a deft touch and then delicately lifted the ball over goalkeeper Mohammed Awad, who had come off his line.

Zamalek had struggled to make an impact in the game but, after 33 minutes, they found themselves level. Goalkeeper Abdullah Al-Mayouf blocked a low shot from Seifeddine Jaziri but new signing Ndiaye was well placed to slot home the rebound.

Al-Hilal tried to bounce back and, just before the break, Awad saved with his left thigh from Moussa Marega when the Malian marksman broke through after a rapier-like attack.

At half-time the Asian champions, who had enjoyed two-thirds of the possession and the better chances, were disappointed to find themselves still on level terms and they began the second-half with clear attacking intent. The second period proved to be more of the same, with the Riyadh side taking the game to their Cairo counterparts.

On the hour, Al-Hilal should have restored their lead. Brazilian attacker Michael, who had just been introduced, reached the byline on the right side of the penalty area and pulled the ball back for Salem Al-Dawsari, who shot wide from just outside the six yard box.

Still the Blues pushed forward but just could not find a way past Awad. Indeed, they almost found themselves behind, with nine minutes remaining, when Egypt international Ahmed “Zizo” Sayed took up a good position only to blast his shot over the bar.

And so the game drifted into penalties. Ighalo scored the first and then Zizo beat Al-Mayouf but not the post to give the Saudi Arabians an initial lead.

Al-Dawsari increased Al-Hilal’s advantage but with Zamalek scoring and Awad then saving from Luciano Vietto, they appeared to be level again — until the video assistant referee ruled the goalkeeper had moved off his line.

The Italian scored at the second time of asking to make it 3-1, which meant that when Mahmoud Hamdy’s weak shot was saved by Al-Mayouf, Carillo could, and did, win the cup for Al-Hilal. 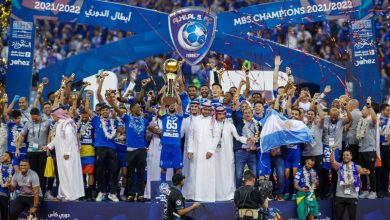