SMA NEWS – MADRID
Goal after goal, Karim Benzema keeps putting his World Cup disappointment behind him.
Benzema scored for the sixth time after being dropped from France’s World Cup squad because of an injury, leading Real Madrid to a 2-0 win at Athletic Bilbao in the Spanish league on Sunday.
The goal allowed Benzema to join former Madrid great Raul with 228 league goals with the club — second to Cristiano Ronaldo’s 311. It also helped Madrid get back within three points of league leader Barcelona, who earlier Sunday had defeated Getafe 1-0 at the Camp Nou.
Benzema’s sixth goal in six matches since the World Cup came with a left-footed volley from inside the area in the 24th minute at San Mames Stadium.
Benzema won the men’s Ballon d’Or award after a great season and had high expectations heading into the World Cup, but he was dropped from France’s squad because of a thigh injury sustained in training just days before the team’s debut. 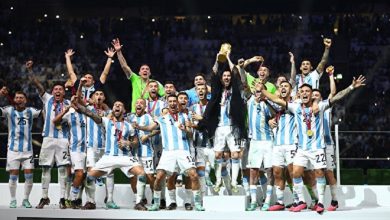