Abdelhamid Sabiri’s free-kick found the net via Saiss from an impressively tight angle in the 73rd minute, beating Thibaut Courtois at his near post, before Aboukhlal converted Hakim Ziyech’s delivery to seal a momentous win in second-half stoppage time.

The North Africans join Saudi Arabia and Japan, the conquerors of Argentina and Germany respectively, in upsetting the odds to stun opponents who, traditionally, have enjoyed long-established success on the world stage.

Part of the centre of Brussels was sealed off by police as a result of crowd trouble and unrest on the back of the result.

Belgium are by no means condemned but may now need to beat Croatia in a Group F showdown to progress to the last 16 – both of those nations were on the podium in Russia only four years ago. 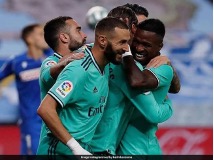