SMA NEWS – WAHRAN
The Yemeni team made an impressive 1-0 win over Sudan team in the match that brought them together on Thursday as part of the quarter-final matches of the Arab Cup for Juniors U-17, which was held in Algeria.
The Yemeni team was able to find an offensive and defensive balance while controlling the midfield, which enabled it to reduce the danger of the Sudanese team, which tried to make several attacks and created several opportunities to score, but it stopped in front of the Yemeni defense and the skills of its goalkeeper.
The only goal of the game for Yemen scored when Mohammed Al-Barwani was obstructed by a Sudanese player inside the penality zone at the 24th minute, so the referee awarded a penalty kick, which was executed by Anwar Al-Tariqi to the left of the goalkeeper, which ended the match and qualified Yemen for the semi-finals, where it will face Morocco. 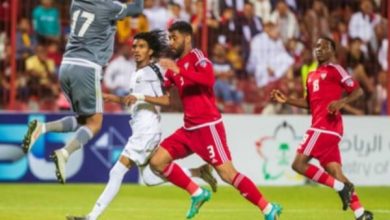